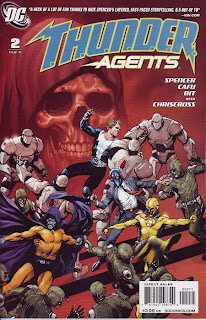 I have now had the opportunity to check out DC Comics‘ second issue of The T.H.U.N.D.E.R. Agents, and well, I hate to say it, but I’m almost about ready to pull my near-unanimous support for the title, based solely upon my read of this second issue, and that, my friends is truly a damn shame.

I really want this book to succeed, I also really want to like it, but, I’m afraid that if the writing follows the industry’s current standard to pad out each story so that what used to be an eight-to-10-page story now fills a full-blown graphic novel, that neither is going to actually happen.

This particular story, Live Fast Die Young follows the New Lightning, a young man from Kenya named Henry Cosgei, who is from a particular tribe in Kenya that are all great runners. The story almost slavishly follows Henry as he progresses from a young man to Lightning, even as it jumps through his life it concurrently follows the present-day story of the two T.H.U.N.D.E.R  back-room operatives (recruiters-cum-handlers if you will) who convince Henry to run for them.

Sure, I know that it is typical for writers to serve up an “off-speed-pitch” in the middle of their story-lines to flesh out the backgrounds of their characters, but this is the second issue, and we are already here. Personally I think it was too soon in the chronology to slow the story down quite this much, but hey, what do I know?

Still, while it is a tad premature to bail so completely on the series, I will admit that I’m not quite so enthusiastic as I was just 30 short days ago when I snatched up and read issue #1. Now I’m going to have to wait a few more issues before I go so far out on a limb as I previously did.

Needless to say, I’ll keep you all informed.

Writer with Attitude, and things to say! View all posts by The Perfessor